Archaeo-optics (archaeo=ancient, optics=light and vision) is the study of the experience and ritual use of light within built spaces. Archaeo-optics is a branch of sensory archaeology, which explores human perceptions of the physical environment in the remote past. Archaeo-optics is a sibling of archaeoastronomy, which deals with ancient observations of celestial bodies, and archaeoacoustics, which deals with applications of sound. Archaeo-optics builds on the information amassed by other branches of sensory archaeology: if archaeoastronomy establishes the time at which sunlight penetrates a built space, then archaeo-optics provides the next layer of information, explaining how the light was used and interpreted. Under a strict set of parameters, the camera obscura principle, light can carry hauntingly ephemeral moving images, which trigger and reinforce ground breaking modes of thought, forms of representation, and belief systems in otherworldly realms.

The archaeological record is replete with excavations of built structures across time, but due to the natural decay of materials and the vagaries of preservation, the further backward in time, the less likely it is for artifacts to have survived. For example, Palaeolithic shelter constructions from the Lower Palaeolithic (c. 2,600,000 – 300,000 BP) and Middle Palaeolithic (c. 300,000 – 45,000 BP) are generally less complete and thus subject to interpretation, while those dating to the Upper Palaeolithic (c. 45,000- 10,000 BP) are both more numerous and better preserved. Palaeolithic structures generally have no remaining superstructure, and must be inferred from a footprint of artifacts.  By contrast, some Neolithic and later structures retain above ground elements. 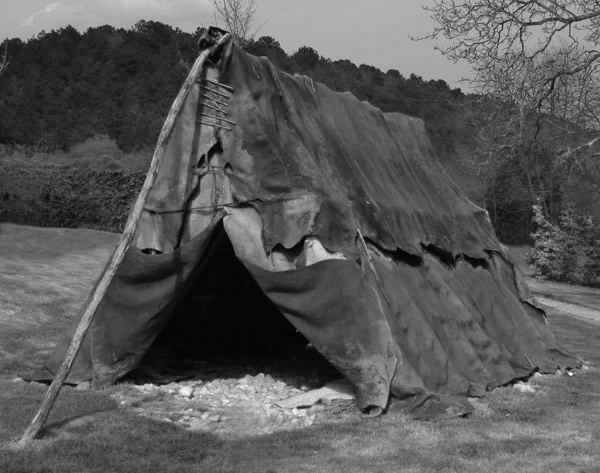 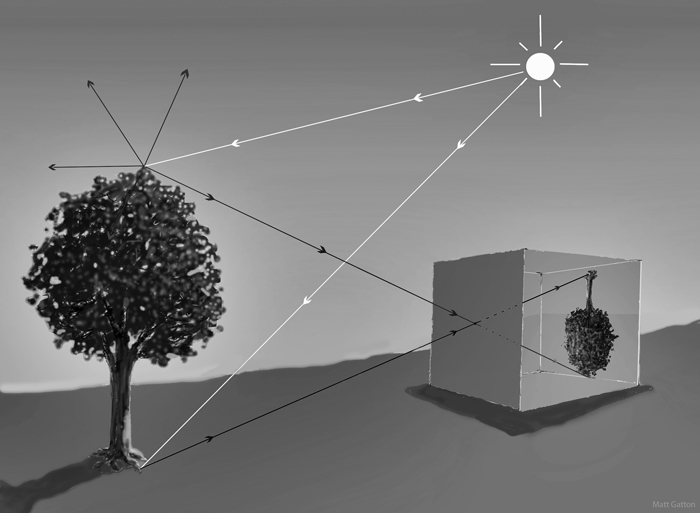 White light emanates from the sun and strikes a leaf on a tree. The leaf absorbs the energy of some of the colors of the spectrum and reflects the color green in all directions. One stream of green light travels through the hole of the camera obscura angling down toward the bottom of the rear wall. Another ray of sunlight strikes the dark brown root at the base of the tree and bounces through the hole angling upward to the top of the rear wall. Light bounces off all other portions of the tree in the same manner creating an inverted image.

The Latin term ‘camera obscura’ means ‘chamber of darkness’. A small hole in the wall allows light to enter the chamber, projecting an inverted image of the outside scene onto the interior surfaces. The optical effect is based on the way light travels in straight lines. The camera obscura principle is a fundamental law of nature as old as light itself. The first pinhole/camera obscura eyes evolved in sea creatures some 540 million years ago during the Cambrian period. Every eyeball in the animal kingdom, every still camera, and every video camera owes it existence to this simple principle.

The existence of the camera obscura has been documented in various places and cultures throughout the historic period (since written records). To date, the oldest discovered document to reference a camera obscura was written by Mo Ti in the fifth century BC, describing the image of a building projected inside the enclosed space of an adjacent building. Shielding ourselves from the outside world has led to the accidental formation of camera obscuras for a very long time.